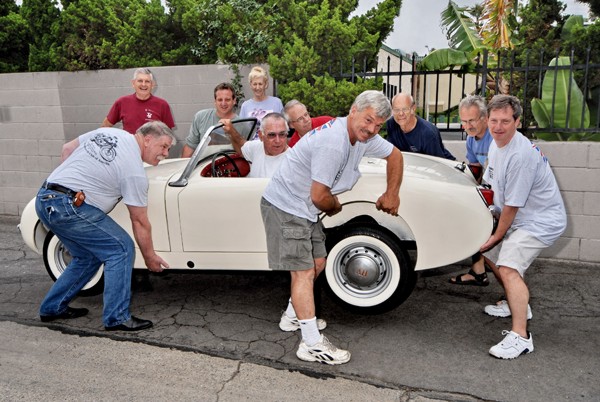 OK, I just received an email from Larry Daniels echoing an idea a few of us have had in the works for a month or so. Buster’s latest offer of generosity with AH Spares catalogs confirms – it is now time for the first call to arms for the first and, if we do it right, the only BUSTERCLUSTER.

As anyone who has paid attention knows, Buster is the original owner of his 1960 Bugeye, and is in the process of restoring it. The restoration needs a jumpstart. In my recent “winter of hell” moving a business from California, I had the chance to hang out with Buster a bunch of times, talk cars and a lot else, break bread (and wind) with him at his beloved Mexicasa restaurant, and confirm my suspicions that he’s one of the good guys (I also had the pleasure of meeting Billy Zoom, another great guy. In addition to sharing the Spridget addiction, there are many of us who grew up in NY listening to WLIR and watching Midnight Special who would have killed to see his iconic Gretsch Silver Jet guitar hanging in his studio as I did!).

So….it’s time for the Cluster. Buster’s car is at paint right now, his shop is a good work space with organized tools and parts, it’s ripe for the finishing. We may even have help from Moss (quiet Frank) to deliver parts at a severe discount, if not cost.

Several Midwesterners and east coasters are up for the trip, and we know we can count on the leftcoasters to support this as well. This will likely be a few months from now in midsummer based on schedules, logistics, Buster’s paint shop, etc. I ask for preliminary commitments now, and, for argument’s sake, let’s shoot for July 28th-30th for the Cluster, with some smaller pre-Clusters prior to that to ensure we can be at a state where Buster and Pam can drive the car around the block by the 30th. Billy Zoom is scheduled to have a pair of little Zooms arrive around that time, and maybe we can blitzkrieg his Sprite as well since it isn’t likely he’ll have a lot of time this summer after the twins arrive.

A long time ago in a garage far, far away…

Actually, it was just before Christmas 2005 in a garage in Anaheim. I was spending a lot of time in California on business, and I made contact with Buster to meet for dinner to break the work-drink-not sleep cycle. I normally drink a beer or 2 a week, during the Cal trips it was 8 to 15 a night. Not a good sign, and I was in need of some normalcy. Buster’s idea of a good time for us was to hang out at a 1953 vintage McDonald’s at a Thursday night impromptu car show and looking over the Bugeye that was trapped in suspended restoration in his garage, pretty much my kind of guy.

As Buster has said, my first thought was that his garage was well-equipped, and with the car as original as it was, it would be a straightforward assembly job (body and paint excepted). I mentioned this, sprinkling the conversation with “Frank could have this done in two days” 4 or 5 times (and this was before I met the relentless dervish of activity and knowledge that is Glen Byrns, BTW). I very briefly met Pam, as she was not feeling especially well. She seemed to brighten up a bit having someone new in the house, despite the huge black circles under my eyes from a week of 13 hour work days followed by 5 or 6 hours of beer. And now my fingers smelled like French fries, to boot. I got home, and called Frank and Peter. I told them what I saw, and how I even had thought of “Bustercluster” as a good, catchy name that would probably reel in 3 or 4 other people. Both immediately said “I’m in.”

Fast forward to February, another meeting with Buster, this time at his beloved Mexicasa restaurant (which is Spanish for “many, many beans for very, very few pesos”) where, despite his irritation that the prices had climbed to over $4 for an entree, we enjoyed dinner and more conversation about the Sprite. Buster told me of how he and Pam loved to entertain guests, and how they used to travel before circumstances came about that made it almost impossible. We brought some Mexicasa home for Miss Pam as I call her, and again she seemed to brighten up a bit. Pam pulled me aside and told me how much Buster enjoyed hanging out and BSing cars with me. So, basically, Pam told me how important it was to her for Buster to be happy, and Buster told me how important it was to him for Pam to be happy. I called Peter and Frank again, told them that if Buster enjoyed having one Spridget guest, 5 or 6 of us would be even better. We decided the Bustercluster had to happen, and I was tasked with doing an inventory of parts on my next visit.

My next trip 2 weeks later was for 13 days, and I got to see Buster several times, including tours of Miss Pam’s childhood home, their first date spot (which was a ride in Buster’s Sprite), and so on. It was all about Pam. In my mind, I pictured what eventually took place on July 30th. Peter mentioned it to Billy Zoom, who lives maybe 3 miles from Buster, and he was in as well. We had 4. I told Buster about the _Cluster idea, and he had me tell Pam. She had a stunned look on her face and tears in her eyes. That did it. I got home and started writing a draft to the list about the idea, and while writing it I got an email from Larry Daniels, telling me what a great guy Buster is and maybe we can arrange something out in California. Unbelievable. As Pete Townshend wrote in a song about mods, “ain’t it funny how we all seem to look the same?” Both Billy and Larry couldn’t join us because of their jobs, but you guys were there in spirit. So I announce to the list, and Buster has told you what the initial response was – staggering. I confess that I am the one who said “don’t worry, only 5 or 6 people will end up being able to come.” OK so I’m wrong…it’s not the first time (note to Buster: upon reflection we didn’t have ARP bolts and re-tapped crankshaft holes when we installed the flywheel on your car, so I shouldn’t have talked Glen out of using loctite. It’ll be fine for at least a week). The date starts getting closer, and Buster is starting to freak about the size, shape, logistics, etc. The phrase Clusterfuck is uttered a few times. No worries from me, though. From my winter project, I was hailed for pulling off a business move on schedule with happy people at the end. These are the magic rules many nimrods outside our hobby don’t get:

1) Know what you want to do very clearly, and make sure everyone shares your vision. Not “work on the Sprite”. For all of us, it was “Pam and Buster will ride in this completed car by Sunday”.

2) Do all stages of the vision with integrity, respect, and good humor for those you are working with. Even if some of them have Triumphs too.

4) Pick the number of good people needed to fill your own gaps in knowledge and ability. If 8 are needed, make sure 10 are there, because you are stupider than you think.

5) Show people the vision in little pieces. A garage walk through by Miss Pam always seemed to get us motivated and reminded us why we were there.

We certainly had the people and the means to follow the 5 easy steps above. And then some. And then some more. A final trip out to see Billy and Buster over dinner in May, and we’re done planning. It’s going to happen. I puckered at the paint shop issues, but Buster had that addressed immediately. July rolls around, and I meet Peter in my work costume at the airport, we avvafew in the bar, I start to be me again. Good flight, my brother from NY waiting for us, get to the hotel that was my winter home away from home to find a complimentary 2 bedroom suite up grade, and Frank unconscious. He wakes up finally, rolls over and calls Jay. Jay comes down, it is immediately like I am hanging with a lifelong friend. We force ourselves to go to bed (not with each other, to be clear), 24 hours awake with time change, and are all up 3 hours later anyway like kids on Christmas morning. We got the Buster cluster around 9. You now know what happened next. Despite the fact that X songs have been in my head all week (you all need to go when Billy’s tour is near you; Peter is a convert going again next week in Milwaukee), there is a stanza in a Springsteen song that’d pop in to my head whenever we made progress:

But tonight there’s rain pouring down on my roof.

The Bugeye drought is over at the Evans, the sky’s been cleared by the rain, and it’s a new morning.